From the 6th century till the 1st century B.C., the Greeks wore a particular linen or wool garment. Men and women of the working class wore this garment over a kolobus—remember this is one of the predecessors to the alb. The over garment was shawl like in appearance, but much bigger than a mere shoulder wrap. It was called the himation. The himation was large enough to be draped over the left shoulder and arm, wrapping around the body on the right side. It was never worn in reverse (draping right shoulder and arm and wrapping around the left side of the body). 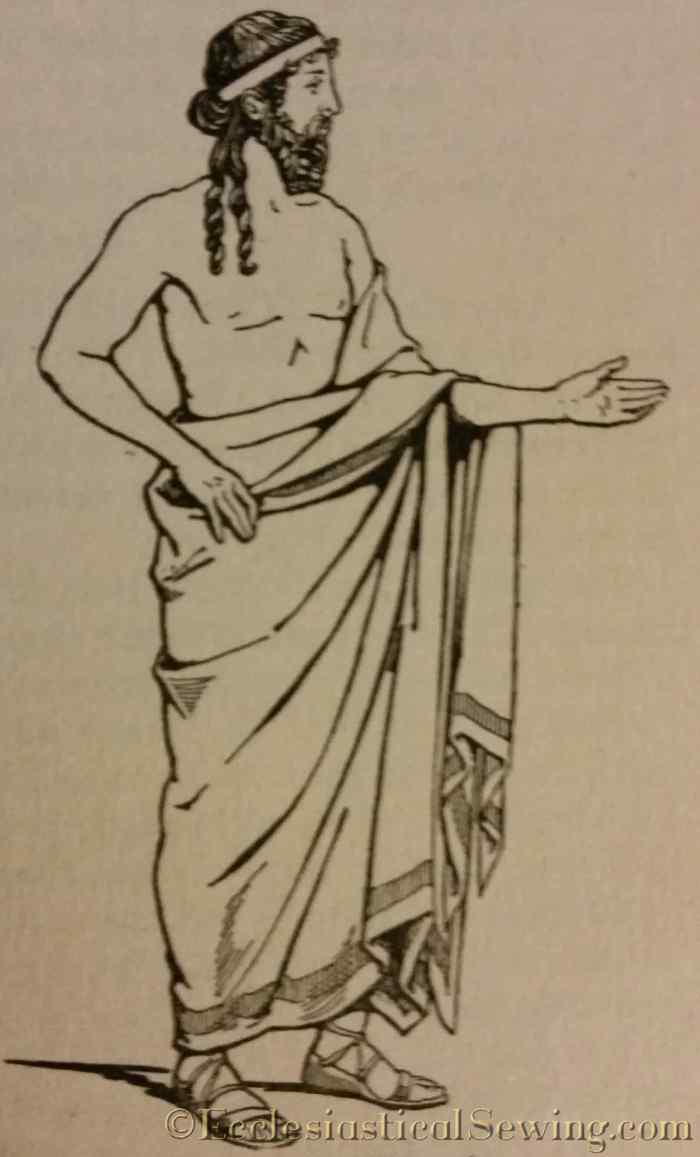 As said above, this was worn over an over garment by the working classes. Men of learning, however, such as philosophers or sages, wore only this garment. It was a mark of distinction. They, who did not do any sort of manual labor, were not at risk of exposing private areas throughout the course of the day. Although perhaps a sign of wealth, comfort, and ease, it must be noted that with this life free of strenuous labor came the dedication to the learning and crafting of the mind and great thoughts. It cannot be said that the philosophers were lazy; they were most fervent in their pursuits.

When the Romans took up the Greek lifestyle, they kept this garment as a sign of the philosopher—only changing the name to Pallium and wearing an alb beneath. It is suggested by Norris that Christ and His Disciples wore the pallium, draped over a type of undergarment.3 These lavish garments would have been labors of love from the band of women, who followed Christ. Norris argues that there is no reason why Christ would have dressed as a peasant. 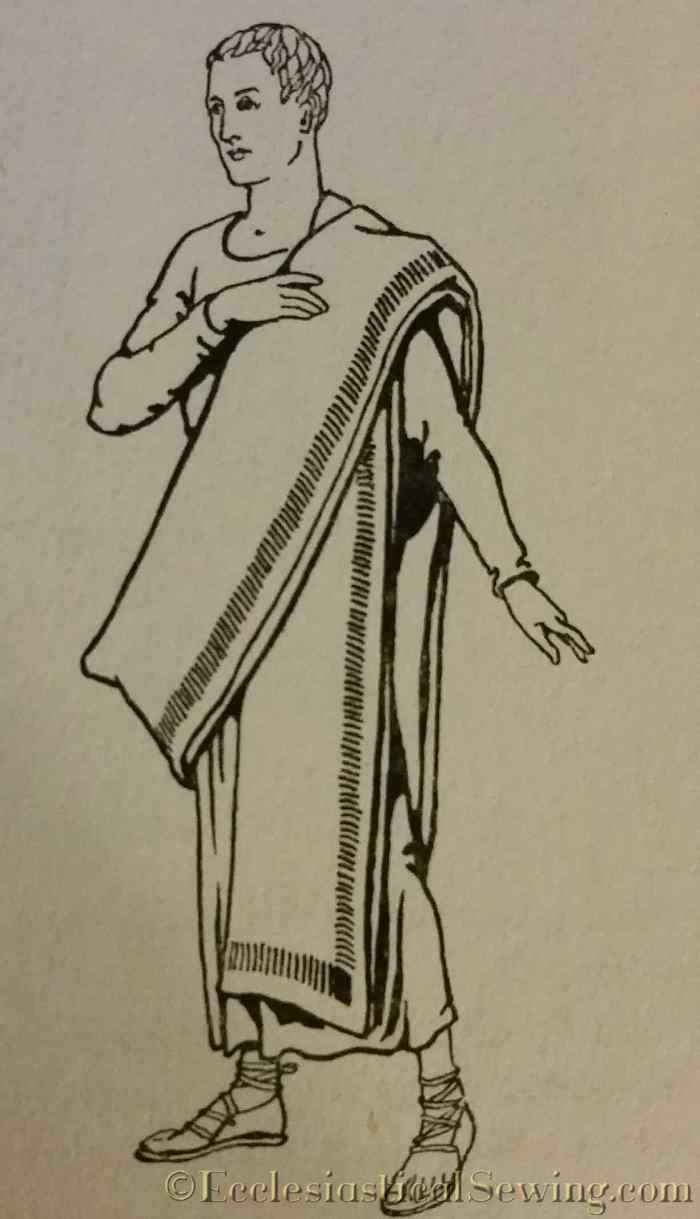 By the 4th century A.D., the pallium had become the mark of a high officer of the empire and had ceased to be used by the commons. Although it was still a large garment in terms of the amount of fabric used, it was folded along the length, instead of hanging around the ankles as a robe. Here we can mark the cessation of this being a garment and the beginning of its use as merely an ornament. Once it became an ornament, we can officially mark its use as a church vestment circa 336-7 A.D. It was bestowed by Marcus, a Bishop of Rome, upon another bishop.

In the 5th century A.D., the pallium broke into two garments: the lorum used for secular or civil purposes and the other the church vestment known as the pallium. By this time, the garment was thinner in width almost scarf like and began to take shape of the garment which we are familiar with today. The pallium was not used by all the clergy, only the pope or the archbishop wore this liturgical vestment. During the 6th century A.D., the custom became that the archbishop wore the pallium through the mass until the gospel had been read. A pope, however, kept the garment on throughout the whole service. There were, of course, disputes where archbishops wanted to keep the pallium on throughout the service.

Now a note on decoration: while the garment was a himation or early pallium, its bottom edges would have had borders. Around the 3rd century A.D., the white pallium would have had colored bottom edges and the new addition of a colored collar. As the liturgical vestment, it was symbolic of a shepherd with his lamb across his shoulders. And it was therefore decorated with beautiful embroidery designs such as crosses or other designs appropriate to the season. 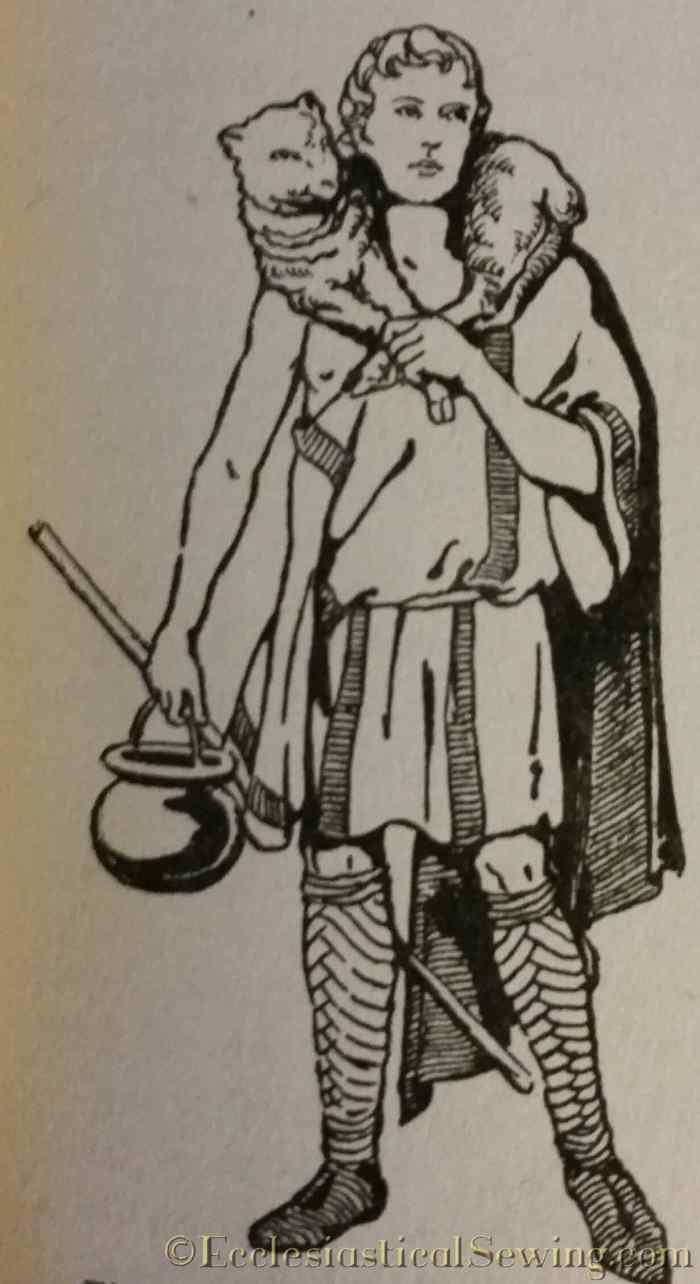 When in the 9th century A.D. the pallium, as the church vestment, became a “Y” shape, it was meant to symbolize even closer the idea of the Good Shepherd. The edge work on the white wool or linen was done in gold and there were six crosses placed on certain parts. This has not changed drastically in the years between up until our present era.

Here at Ecclesiastical Sewing, we find the history of such church vestments utterly fascinating. It is incredible how the robe that marked the Greek and Roman philosopher changed throughout the years to be the beloved pallium that adorns our ministers of the faith. Thank you for allowing us to share this valuable information with you! For more information on the pallium, please read the second chapter in Church Vestments: Their Origin & Development by Herbert Norris.