Why do we wish to make our Church beautiful? Because God our heavenly Father is there. The Tabernacle in the wilderness, though scarcely more than a tent, was made glorious within and without because it was the sanctuary of God on earth. Our dear Church here is the Sanctuary of God, where we meet Him and lean on Him. And having such an honoured guest we want to make the place of His feet beautiful. (Mackrille, p. 4)

The name of Lucy Vaughn Hayden Mackrille, is well know by many involved in Ecclesiastical Sewing and the making of church vestments as the founder of the Washington Cathedral Altar Guild. Her book entitled Church Embroidery and Church Vestments is a valuable resource for seamstresses, providing detailed instructions for making many vestments. Her book is frequently reference in my blog, as well as in my work. The book is a favorite. The photos, while taken in black and white, are clear. The instructions, while written with a certain level of assumed knowledge, provide more detail than many other texts on the subject of making church vestments.

For those who follow this blog regularly, you know that I have acquired a sizable library on topics relating to church vestments, church embroidery, designs, whitework, and linens. There is an ongoing search for books relating to these topics. Over the years, I have searched by Lucy Mackrille’s name, and by the title of her book, thinking and wondering if there might be the slimmest of chance that another title exists.  Almost having given up on the possibility, a few weeks ago, the unexpected happened. When a link for Lucy Mackrille’s name was selected, a new title appeared, which resulted in one of those moments where the tendency is to let out a shout, “I can’t believe this! A new book by Lucy!” But then I quickly remembered the sleeping members of my family, and contained the joy and excitement. An order was quickly dispatched, and the wait began.

The book arrived, and is typical Lucy in style, which makes for a delightful read. 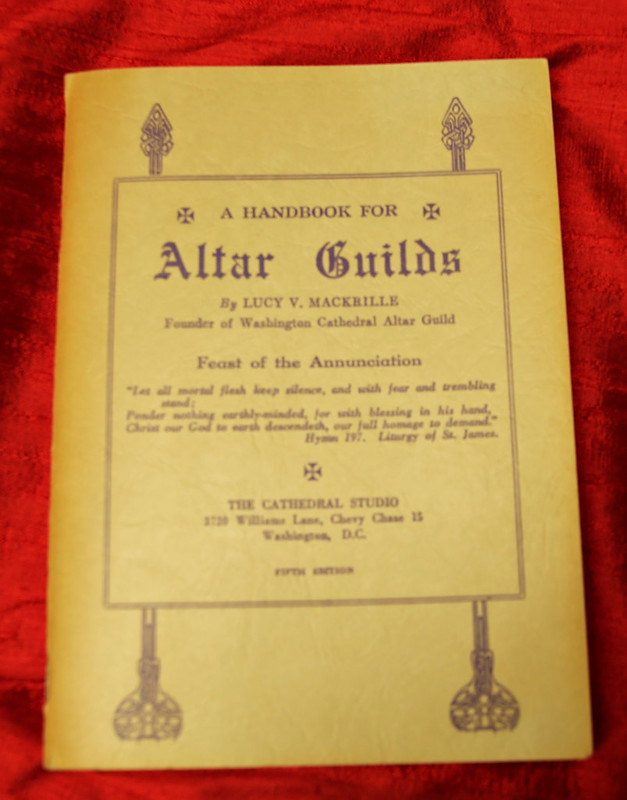 Intended as a reference manual for members of an altar guild, this small books begins with albs and goes through weddings, touching on each topic with a paragraph or so of information. Many items of interest are included:

The Fair Linen: ……Linen has been used to cover the Altar at the Clelbration of Holy Communion from primitive times……………Fair does not only mean clean, but refers also to the quality of the cloth……….Hence we say that a “Fair Linen Cloth” does not mean only a plain, clean linen cloth, but one that has been made beautiful for its special purpose….The embroidery should not be raise or padded, but be perfectly flat, that the Chalice my not tipped over when coming in contact with heavy embroidery. (Mackrille, p. 11-2)

Instructions on color use, and changes of the color ritual used at the Washington Cathedral are discussed at length. Miss Mackrille notes that the Cathedral originally followed the Ancient color use of red, white and blue, but eventually adopted the Roman Color use. One interesting note is that the color for funerals is blue, which is a very dark blue, like the color of the American Flag. Blue is also the color noted for use during the seasons of Advent and Lent. Maundy Thursday was white, and Good Friday was black. 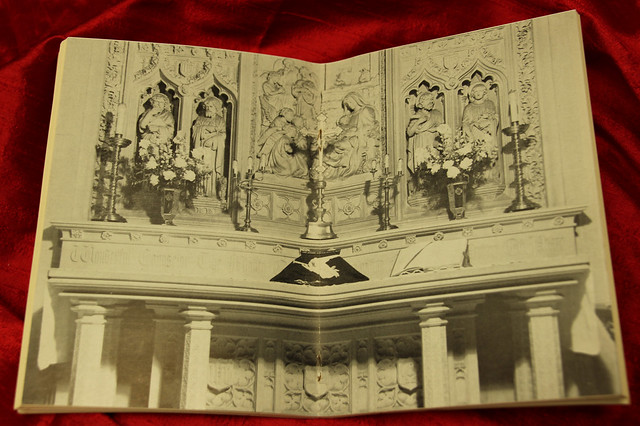 This rare little gem, A Handbook for Altar Guilds, while difficult to find, contains useful information for anyone interested in church altar guilds.  It reveals a different side of the author in the various narratives on the duties of the church to support the work of the altar guild. That frustration is often felt in churches today when congregations fail to support the necessary work of keeping the Lord’s altar beautiful for the worship service.