A man should, from his youth, seek for forms which are beautiful. At first he should love but one of them; then recognize the beauty which resides in one as the sister of that which dwells in another. Philosophy helps, from Plato onwards, because it puts beauty in the right place as one of the three eternal values equal with truth and goodness so that  what applies to one of them is true of the others.’ – Sir Ninian Comper (Symunson & Bucknall, 2006, p.19)

Beauty is something that is often missing in our modern world, and yet there was a time when beauty was part of every element imaginable within the church, from the exterior, to the grand and soaring vaulted ceilings, the the intricate stone and wood carving, and church brasses, leaving no detail untouched by design. Even the soft furnishings of church vestments and altar hangings were designed to be beautiful and fit within the church.

Church design has its beginning with the Book of Exodus, where God gave specific directions to Moses and Aaron for creating the tabernacle and clothing for the priesthood. Here we find a detailed history, requiring the finest materials and most skilled craftsman to create objects of beauty for use in worship.

Take from among you a contribution to the Lord. Whoever is of a generous heart, let him bring the Lord‘s contribution: gold, silver, and bronze; blue and purple and scarlet yarns and fine twined linen; goats’ hair, tanned rams’ skins, and goatskins;acacia wood, oil for the light, spices for the anointing oil and for the fragrant incense,  and onyx stones for the ephod and for the breastpiece.…..Then Moses said to the people of Israel, “See, the Lord has called by name Bezalel the son of Uri, son of Hur, of the tribe of Judah; and he has filled him with the Spirit of God, with skill, with intelligence, with knowledge, and with all craftsmanship, to devise artistic designs, to work in gold and silver and bronze, in cutting stones for setting, and in carving wood, for work in every skilled craft. And he has inspired him to teach, both him and Oholiab the son of Ahisamach of the tribe of Dan. He has filled them with skill to do every sort of work done by an engraver or by a designer or by an embroiderer in blue and purple and scarlet yarns and fine twined linen, or by a weaver—by any sort of workman or skilled designer. (Exodus 35:5-9, 30-35 ESV Lutheran Study Bible)

King Solomon’s temple by description  in 2 Chronicles 3-4 must have been a thing of beauty almost beyond our ability to imagine, with the inside covered in pure gold, and decorated with palm trees, cherubim, and chain designs.  Examples of King Solomon’s Temple  have been rendered by various sources, such as the example shown below:

Beautiful objects for use in a worship setting have not been limited to the ancient past of the Old Testament. Some of the finest examples of Ecclesiastical Embroidery date from the time period often referred to as Opus Anglicanum.  In this post on The Beauty of the Art of Ecclesiastical Embroidery, there are links to articles on the topic of this well know style of English Church Embroidery. I promise to get back to Opus Anglicanum at a future time, as it is a fascinating period of study with regards to embroidery done for the church.

Today’s focus is on John Ninian Comper, or Ninian Comper as he was often called. Comper, who sought beauty in a lifelong quest,  began his design career in 1880 at the tender age of 16, while attending the Aberdeen School of Art. He was introduced to Charles Kempe in 1882, and began to work in his studio. Comper’s brief sojourn with Kempe helped develop skills in aesthetics which would benefit him for the remainder of his career.  It was during his year with Kempe that Ninian Comper realized the true value of apprenticeships, in that it took years of dedication and study to truly develop the skills beyond that of a mere craftsman.  A visit in 1883 to a church under construction designed by George Frederick Bodley lead to more changes in the  young Comper’s life when he became an apprentice under Bodley.  Comper continued training for four years under Bodley and his partner, Thomas Garner, noted as two of the leading church architects of the day.

Many of the great designers of the period between 1870 and 1920 started their careers designing Ecclesiastical Embroideries. When Comper left Bodley’s studio in 1887, he too began designing church embroideries for the Sisters of Bethany’s School of Embroidery.(Schoeser, 1998)  This association was to last a lifetime. Under his direction, the work produced at the School of Embroidery is noted as follows:

The school came to produce the finest church embroidery procurable – vestments, banners, altar frontals, and linen – superior to the existing standards in other convent embroidery rooms, better than contemporary work on the Continent, and commercial ventures. It is unequaled and came to exercise strong influence on church embroidery and ecclesiastical taste. (Symunson & Bucknall, 2006, p.24)

During his seventy year career, Comper had a great influence in restoring the proportions, as well as the fabrics and colors of Gothic altars. He was involved not only with the designs used for embroidery, but also with the techniques of embroidery, including the technique of Or Nué.

….techniques, the latter including or nué, developed with the Sisters of Bethany, with whom he worked most closely. (Schoeser, 2009, p. 37) 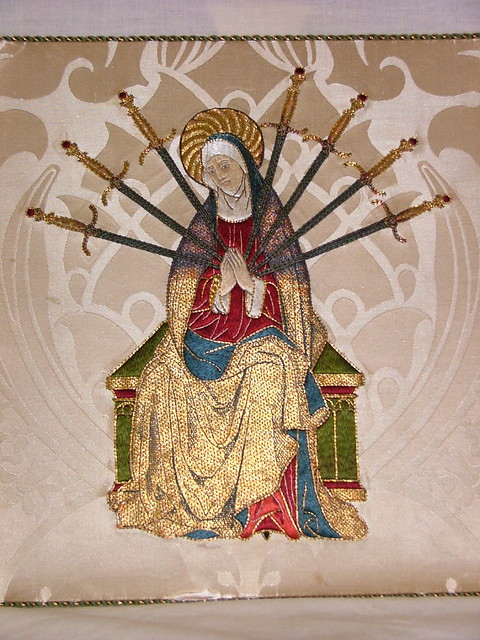 Thankfully, examples of Comper’s works are still available to enjoy and study at such places as the Victoria and Albert Museum. 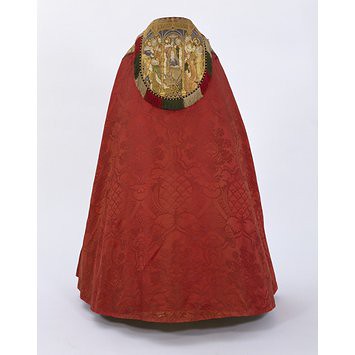 The above cope designed by Comper is notable in that the beautiful fabric was created according to his specification by Perkins and Sons. It appears that Comper often used M Perkins and Sons for his fabrics:

Thankfully, M Perkins and Sons is still making the lovely Ecclesiastical fabrics used in Comper’s day, and soon, there will be news concerning those lovely fabrics here on Ecclesiastical Sewing, so please check back.

The art of hand embroidery is also being kept alive today, thanks to the efforts and training available at places such as the Royal School of Needlework, Hand & Lock, the Williamsburg School of Needlework, and the distance learning classes from The Embroiderers’ Guild of America. For those not able to travel to courses or partake in a distance learning program, the internet offers an array of possibilities to learn the skills of hand embroidery and church vestment making.  And soon, there will be resources available here on Ecclesiastical Sewing, too!

Symondson, A. and Bucknall, S. (2006). Sir Ninian Comper: An introduction to his life and work. United Kingdom: Spire Books Ltd.