A few weeks back the Large Advent Star  was started for the Altar Frontal church embroidery project.  It did not take long before it became apparent that the Silver Threads 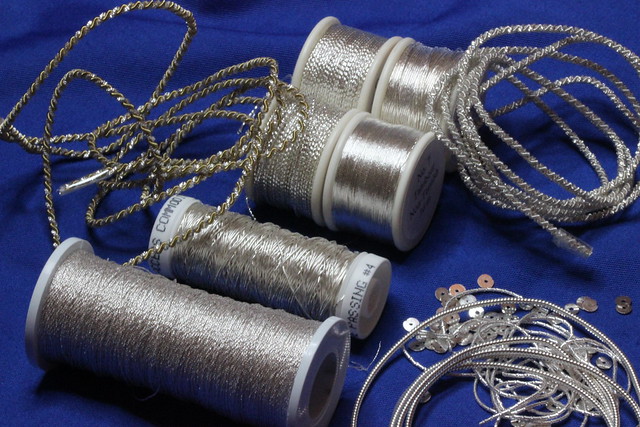 available on hand were not going to work for this Ecclesiastical Sewing project due to their small size. An order was placed for goldwork embroidery threads, but alas, the instructor was off teaching, which is a wonderful thing for her and her students.  So, the order had to await her return before it could ship.

It worked out well. Gears were shifted and the time was well spent working on the Pulpit Fall for the Advent Set.  A great deal of progress was made on that piece.  But it, too, needed a larger selection of Silver threads than I had on hand.

Yesterday, the much awaited order arrived!  What a thrill it was.  Let’s take a moment and look at a few of the treasures.  With goldwork embroidery, the treasures are most often gold. Most often, but not this time. These treasures are not of gold; they are  – COPPER!  Rich, warm, reddish-golden brown copper.

This color is wonderful!  It has a warmth, a glow, a depth that adds such richness to a project.  It shines and glimmers, but with a bit of fire from the subdued red tints. I’ll be the first to admit that I did not think I would like copper metallic threads.  But the more that copper thread sat out on the sewing table, the more it was looked at, the more it burned its way into my heart.  It took a while, but I am a copper color convert when it comes to goldwork threads.  This is a wonderful, rich metallic thread and I hope to use it often in combination with it’s more familiar cousins, Silver and Gold.

The above photo shows three copper threads.  The thread on the right with the waves and kinks is Medium Rococco in Copper. It looks a bit wild all twisted up.  The smooth bundle is Copper 371 Lurex thread.  This is a finer metallic thread size thread, like a smaller version of the Copper Passing Thread.  The Copper 371 Lurex has no definite plans for use, yet.  But, perhaps – it might show up as………………..well, let’s wait and see.  That might be a surprise.  The final thread on the spool is the Kreinik cord in the copper.  Its intended use is for couching the Rococco and other copper threads.

Two of these copper metallic threads were put right to use yesterday after the shipment was unpacked.  The lower edge of the shell needed one more row of metallic threads. Originally, the plan was to add another row of the copper passing thread, until the Rococco arrived. Suddenly the plans changed.  It was too irresistible. Why not use this wavy goldwork embroidery thread as the lower edge of the shell? It would add a change in texture, as well as more of that rich reddish-gold color.

After testing a few stitches, it was time to continue forward using the Medium Copper Rococco Thread. The size was nice, and it was the perfect finishing touch.  If you have never used Rococco Metallic threads you might not be familiar with a few little characteristics of the thread. The medium Rococco is rather thick, and it tends to be a little stiff when compared to other goldwork threads.  It is too large to fit easily in the eye of a needle.  A size 22 Chenille  needle is large, but add a bulky goldwork thread, and try to plunge that through fabric. It just does not want to go without a great deal of force, even with the use of an awl  or The Best laying Tool to make a hole in the fabric prior to plunging the thread tails.

How should I proceed?  Enter the wonderful, tail-plunging savior – the Lasso. The book  A to Z Goldwork does a wonderful job of describing the process of plunging goldwork thread tails.  And Mary Corbet over on Needle’nThread provides a great book review on this indispensable resource for working with Goldwork threads.  To plunge a goldwork thread tail with a plunging lasso, a heavy thread such as buttonhole thread is needed.  A hole is placed in the fabric with an awl or mellor (which is also available in other forms besides gold), the heavy thread is pulled through the hole, leaving a small loop on the surface. The tip of the goldwork thread is placed in the lasso, and the buttonhole thread is carefully pulled through to the backside, along with the thread tail. There is a wonderful little “pop” sound heard as the tail finally is pulled through the fabric. That “pop” is music to my ears and means success: the tail is through and ready for stitching down on the back of the work.

Medium Rococco is one of the largest and thickest goldwork threads, making it a challenge to plunge the tails on this thread. But with the tips in the  A to Z Goldwork with Silk Embroidery book put out by Country Bumpkin of Australia, one is sure to be successful with taming even the thickest tails.

The key to success with a goldwork project is the shimmer of light as it hits and plays of the metallic threads. Adding another color to the mix, in the right proportions is a nice addition which opens up a host of design options. Taking the chance and placing the order for these copper threads has turned on to be a delight.  What are your favorite colors of goldwork threads – do you mix things up, or stick with the same color?  Share your comments below!