The use of orphrey bands for trimming pastoral stoles opens an endless array of design possibilities. Many of you might be familiar with using orphreys as a means of adding design details to ecclesiastical sewing projects, while others may be wondering what exactly does this word mean, and how does one pronounce it.  Orphreys are decorative bands or ornamental borders used on items, especially Ecclesiastical items, such as church vestments and altar hangings.

In French Orphron, which Du Cange explains by Frange d’ or. It signifies a band or bands of gold and rich embroidery, affixed to vestments. Its Latin name (aurifrisium) expresses accurately its meaning and etymology. (Pugin, 1863, p. 178)

In his book, Glossary of Ecclesiastical Ornament, Augustus Pugin refers to ornamented garments of this type worn by ancient Romans as auriclavae or clavatae. Tunics were ornamented with a band referred to as a clavus or clavi. The bands, which were often purple in color, were sewn on to tunics.

Orphrey bands take on different shapes, depending on the garment they are being applied to. Chasubles may have narrow orphreys styled and placed in such a way as to resemble a “Y” on both the front and back of the garment. A Roman style chasuble may have a Tao Cross on the front and a single column band on the back.

Dalmatic and tunics have narrow bands on the front and back with cross bars either at the chest or about 12″ to 15″ up from the bottom hem. Orphreys may also be seen on an alb, although the term often changes and is referred to as an apparel. Copes have an orphrey band applied to the long straight edge. 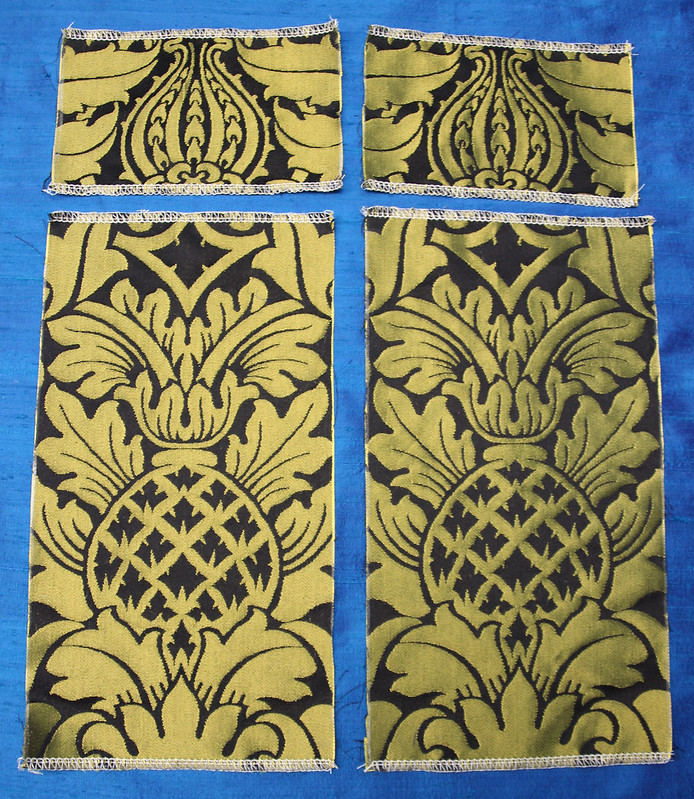 The decorative bands may be created in a variety of styles and types ranging from hand embroidered bands to bands cut from more elaborate fabrics. In ages past, elaborate designs were worked in gold and silk threads on backgrounds of linen, silk, or velvet. While the surviving works available for view in museums and the pages of books are stunning works of art, they are often beyond the time constraints for the average vestment maker today.

Thankfully, there is a wide range of fabrics available for making orphreys bands for vestments today. We will look at a variety of fabrics and how one might use them as orphrey trim on future Ecclesiastical Sewing projects.